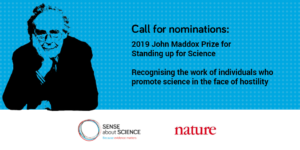 Nominations are welcome for the 2019 recipient of the John Maddox Prize, which recognises the work of individuals who promote sound science and evidence on a matter of public interest, facing difficulty or hostility in doing so.

The John Maddox Prize for Standing up for Science is awarded to an individual for any kind of public activity in any of the areas listed below:

An additional prize is awarded to an individual who in the opinion of the judges is at an early stage of their career.

The John Maddox Prize awards evening will be hosted at Wellcome Collection, London in November, and an announcement is published in Nature. Winners will receive £3000.

The prize is organised by the charity Sense About Science. More information and a nomination form are available on-line.